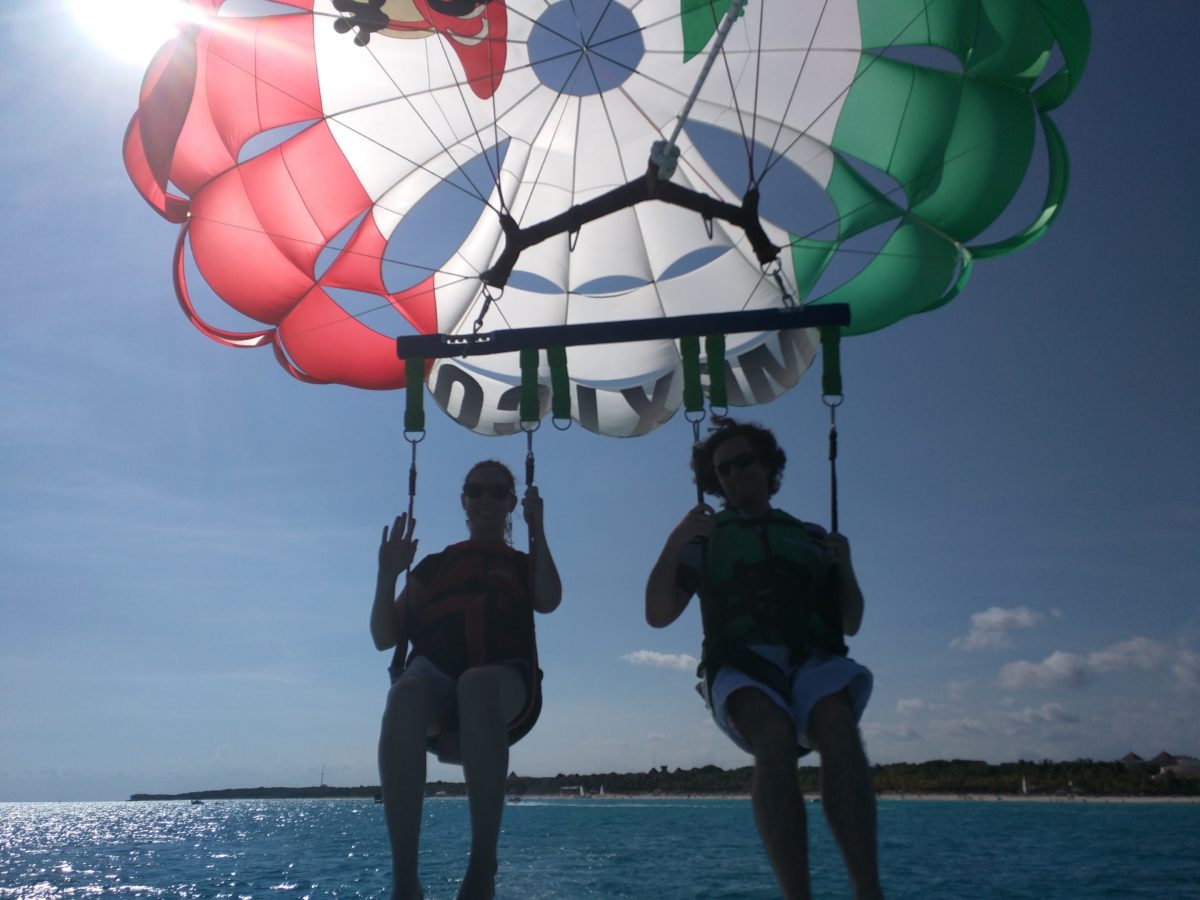 While in Mexico, I had a serendipitous run-in with a jet ski.

Really, it was more of a battle between the ocean and my ribs. The ocean used the jet ski as a battering ram and it totally won.

The serendipitous part…I’ll get to that in a second.

My husband decided to take me parasailing for the first time while in Mexico for our anniversary. It was really sweet, but (there’s always a but) as we stood on the beach with the waves crashing at our feet, waiting for the jet ski taxi to take us to the parasailing boat, I began to have doubts.

See, I’m the most accident prone individual you will ever meet.

If someone in a group is going to be hurt, it’s going to be me. For example, my dad and brother used to hunt when we were growing up. They’d bring back quail, and I’d bite into the one bullet left in all of the meat. Every time. Not just once, but every single time. If there’s something to stub your toe on in a mile radius, I’ll find it for you. Bang your hip? I’ll test it out. Bird poop on you? They got to me, first.

So when I saw this little jet ski fighting the big ocean waves, and it was supposed to carry a large Mexican driver, myself, and my husband, I began to get anxious.

The jet ski rolls in on a wave. There are two people holding it in place, and my husband is steadying the back. “Go on, Christina,” they said. “You get on first.”

They all missed my eye roll. But, I got on. Blindly trusting these three strong men to hold this one jet ski in place. What’s the worst that could happen? Three against one. The odds were in my favor.

The ocean decided to throw an extra large wave at us as soon as I reached for the jet ski. The jet ski rammed into my side, flipped me over, feet in the air, and hit me three more times. Somehow, I grappled onto the thing.

It was already hard to catch my breath. I knew, like my aching knees know when the weather is changing, I knew, this was going to hurt for days. But, I had a few hours left before the pain really sat in.

We went parasailing. It was fine. Peaceful high in the sky above the Caribbean blue water, whatever. My ribs hurt.

We got down, boarded the jet ski taxi of death, and rode back to the beach without another incident. Probably the universe had decided almost cracking my ribs was enough for one day.

By dinner, my entire side was swollen. The phrase baseball-sized hail kept coming into my mind. It hadn’t started bruising…yet. I couldn’t breathe deep, couldn’t laugh, couldn’t even sleep. My whole side radiated with pain.

And I was so, so grateful.

See, I have this character in my psychological suspense novel, Traveler. Her name, sometimes his name, is Jesse David. She / He is a fluid-gender adult on vacation with her / his abusive mother. At one point in the book, the mother crushes her cane into Jesse’s side, cracking her ribs.

But, the scene has been bothering me. I couldn’t have Jesse’s ribs actually crack. Jesse needs to do things which require physical effort to complete the story. Cracked ribs turn into broken ribs turn into punctured lungs…that didn’t work.

My jet ski incident helped me understand that bruised ribs are horrible. Horrible enough to cause a lot of pain and discomfort, but not so horrible that a person is temporarily disabled.

For a writer, every experience is writing fodder. Even almost being killed by a runaway jet ski.

I’ve used emergency room visits, being hooked up to an IV, being covered in vomit…all these horrible musts of life, I’ve used in a book.

And honestly, it makes the going through of the pain much easier to deal with, because by focusing on each little owie of pain from a writing perspective, it gives the pain purpose. Meaning.

What about you? Are you accident-prone? What are some ways you cope with being known as the person who will trip over their own feet? (Seriously, I’m looking for coping mechanisms!)